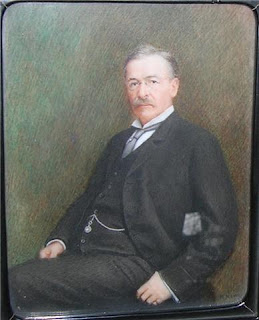 William Alfred Paine (1855-1929) was a businessman who co-founded the stock brokerage firm of Paine Webber. He began his career in finance in 1873 as a clerk at a Boston bank. In 1880, with a loan from his minister father, he partnered with Wallace G. Webber to create the brokerage firm Paine, Webber & Company, becoming members of both the Boston and New York Stock Exchanges. Paine also invested in the Copper Range Consolidated Company, a major copper mining venture in Michigan, of which he served as president. The town of Painesdale, Michigan was named for him and Freda, Michigan was named for his daughter. His son, F. Ward Paine, later became head of Paine, Webber & Company. The Paine Monument is on Summit Avenue and was designed by Louis C. Tiffany Studios. A large limestone memorial with a center pediment section flanked by high backed seats in the form of an exhedra, it has urns surmounting the end plinths. The Celtic inspired tracery on the top portion of the monument and the pediment add lightness to the design with a recessed arched opening with flanking Doric columns.
Posted by Anthony M. Sammarco at 11:39 AM