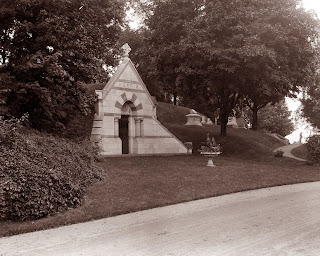 The Harris Mausoleum is on Consecration Avenue and is set into the side of Consecration Hill. Horatio Harris (1821-1876) and his wife Eunice Crehore Harris lived on Walnut Avenue in Roxbury, and after their deaths their estate was developed as Horatio Harris Park and Harriswood Crescent, an impressive row of Queen Anne Revival houses built in 1890. Harris was a commission merchant, and proprietor of the Adams, Oxnard and Continental Sugar Refineries. He was one of the originators, and a director, of the Metropolitan Street Railway in Roxbury.
Posted by Anthony M. Sammarco at 4:03 PM