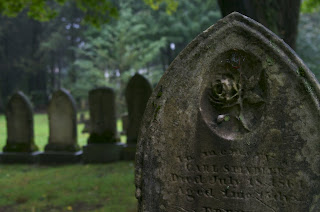 It rained for most of this weekend, but there was a break in the showers on Saturday morning (Sept. 27), so I headed out the door for a couple of hours of photo shooting at the cemetery. It was a little foggy and drizzly, and the light was diffuse, which made for great color saturation. A few of the leaves were turning or falling, but most of the summer's foliage was still on the bushes and trees. You can see photos from my expedition here.
Posted by Lance Ozier at 9:48 PM No comments: 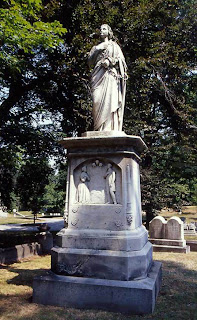 On every single one of my tours of Victorian sculpture at Forest Hills, I point out the allegorical figures that dot the landscape, as these are some of our loveliest works of art.

An “allegorical figure” is a figural sculpture (almost always a woman) that embodies or represents an abstract concept. These statues, therefore, are a sort of code, or message conveying an idea or an emotion. They also have special descriptive names.

At Forest Hills we have some very fine allegorical figures. One of the types that appears most often is the figure known as “Hope.” Hope is recognizable because of the anchor that always appears next to her. Why an anchor? That’s a complicated question, but a very short answer is that the anchor was an early Christian symbol, a sort of abstracted cross that became linked to steadfastness, hope, and piety. (For one on-line explanation of anchors, check out this handy reference site: www.bookrags.com.) Some examples of Hope figures at Forest Hills include the Nathaniel Tucker monument on Linden Avenue (above), and the Samuel C. Reed monument on Consecration Avenue.

Another very popular allegorical figure is that of “Grief.” This enrobed woman usually leans on one elbow on a pedestal next to her, bent over in mourning. Her posture expresses her sadness and despair. Often next to her is a funerary urn, which refers to cremation and general loss. Fine examples of Grief figures at Forest Hills include the Robbins monument on Warren Avenue (above).

For more examples of these and other types of monuments, see my Scholar’s Tour on the Trust's website.
Posted by Elise M. Ciregna at 10:46 AM No comments:

The theft of three bronze sculptures here at Forest Hills prompted a great editorial calling for new reporting regulations for scrap metal yards. These regulations would reduce the theft of objects for the value of materials and is urgently needed as prices for metals soar. This type of theft is particularly devastating when sculpture is the target. Once melted down, there is no possibility of recovering the work; it has been destroyed for a fraction of its price as artwork and in vicious disregard for craftsmanship, meaning, and unique beauty. The Globe put it well:

It's heartbreaking to learn that bronze sculptures in the Forest Hills Cemetery have been stolen from their eternal homes, possibly to be sold off for scrap metal. The beauty and serenity of the 19th century garden cemetery, enhanced by these contemporary sculptures, cannot be valued in price per ton.

Public art all over Boston is at risk, so if you agree, contact your state legislators. Police investigation turned up the information that our sculpture was offered to one scrap yard that refused to take it, suspecting theft. But that doesn't mean the thieves didn't locate a dealer willing to look the other way.

The media has been very helpful covering the story of the theft of three contemporary bronze sculptures from Forest Hills and publicizing the reward for information leading to their regurn: The Bulletin, The JP Gazette, The The Boston Globe, WBUR 90.9 radio, and Fox News.
Posted by Cecily Miller at 4:34 PM No comments: