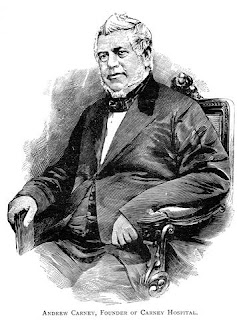 Andrew Carney (1794-1864) was called “One of God’s Noblemen” as he was to endow a hospital that still bears his name in Dorchester. A native of Ireland, he was apprenticed as a tailor before joining with Jacob Sleeper in the firm of Carney & Sleeper, manufacturers of men’s ready made clothing. Carney served as a trustee of the Hibernia Savings Bank and of many charitable endeavors. His generosity helped to establish Boston College and the Immaculate Conception Church in Boston’s South End. The Carney Hospital was founded in 1863 to serve the needs of all “where the sick without distinction of creed, color or nation shall be received and cared for.” The Carney Lot is at the junction of Lake and Forest Avenues and is one of the most prominent sites in the cemetery, overlooking Lake Hibiscus. The Carney Memorial is an elaborate confection of white marble Gothic ornamentation with an angel set under a baldicchino and a four sided cap and a center pinnacle surmounted by a cross. Carney was initially buried in the chapel at the Carney Hospital in South Boston but was moved and reinterred at Forest Hills by his wife Pamelia Reggio Carney (1793-1875.)