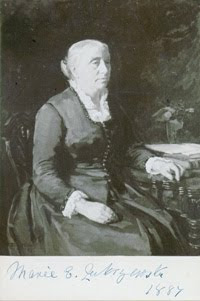 Dr. Marie Elizabeth Zakrzewska (1829-1902) was a native of Poland and was educated at the Cleveland Western Reserve Medical College, and taught obstetrics at the New England Female Medical College in Boston. Dr. Zak, as she was affectionately called, was the founder of the New England Hospital for Women and Children, a ten bed hospital that grew in size and influence under her able direction. Founding the female-staffed Boston based hospital in 1862, its mission was to provide specialized medical care for women and children, which was a somewhat novel concept but taken to with alacrity by Bostonians. The first professional nursing program in this country was launched in this hospital. Her monument tells it all, she was a “skilful and human physician.”

Posted by Anthony M. Sammarco at 9:57 AM