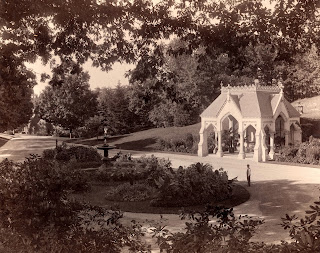 The Receiving Tomb at Forest Hills Cemetery was designed by William Ralph Emerson and Carl Fehmer, partners in the architectural firm of Emerson & Fehmer in Boston, and built in 1871 on Consecration Avenue near the Main Gate. The high style granite Victorian Gothic Revival building has underground crypts where burials could be securely held during winter months while awaiting burial, or for transport elsewhere. Opposite the Receiving Tomb is a magnificent oval garden that has been bedded out with specimen plants and perennials for well over a century, with a central decorative playing fountain that was added in 1878.
Posted by Anthony M. Sammarco at 3:32 PM