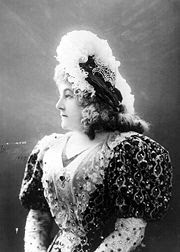 Fanny Lily Gypsy Davenport (1850-1898) was a well-known actress in the late nineteenth century. Born in London to parents who were noted actors, she was educated in Boston, and first appeared at the Howard Athenaeum in Boston, as the child of Metamora. Davenport was eminently successful as an actress, with a wide spectrum of roles that went from Shakespeare to French melodrama; she achieved fame by obtaining the American rights to the dramatist Victorien Sardou’s highly emotional plays. This photo from c.1880 depicts her as the spendthrift Lady Teazle in the comedy of manners “School for Scandal.” The Davenport monument is a white marble tree trunk on Arethusa Path.
Posted by Anthony M. Sammarco at 9:05 AM