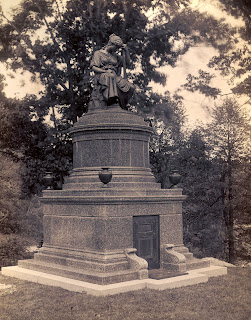 The Randidge Monument on Fir Avenue commemorates George L. Randidge (1820-1890) and was executed in 1891 by sculptor Adolph Robert Kraus, with the enormous plinth base designed by the Boston architectural firm of Fehmer and Page. The bronze seated figure of Grief in classical robes leans in sorrow on an inverted torch; bronze funerary urns decorate the four corners of the base, which was designed by noted architects Carl Fehmer and Samuel F. Page. Said at the time of its unveiling the “whole monument in its chaste correctness and simplicity, its rich low color, a peculiar brownish granite polish, is a model for emulation in our cemeteries.” Adolph Robert Kraus was the sculptor of Grief, which is a poignant and somber rendering of a mourning maiden, resting her head on her hand which grasps an inverted torch which symbolizes death. Kraus was a well-known sculptor who also did the Jacob Wirth Memorial Fame and the bust of Karl Heinzen that surmounts his monument.
Posted by Anthony M. Sammarco at 12:55 PM