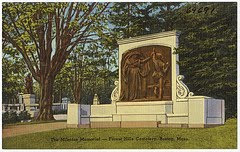 The Milmore Monument is known as Death Staying the Sculptor’s Hand, and is considered to be the masterpiece of Daniel Chester French. This memorial celebrates the lives of sculptor Martin Milmore (1844-1883) and his brother Joseph (1841-1886), a talented stonecutter who taught the art of carving to Martin. The beautiful allegorical figure of the Angel of Death gently lays her hand on the sculptor’s hand, as a reminder that she has come to usher him away. In her other hand Death carries a bouquet of poppies, which holds the promise of eternal sleep. The sculptor, wearing his work apron and holding his tools, is surprised, bewildered and seemingly unwilling to be interrupted. Martin Milmore was a native of Sligo, Ireland and a tall man with large dark eyes and unruly long dark hair; he was said to be “a picturesque figure” by his sculptor friend Daniel Chester French. He cut a dashing figure in his signature black broad brimmed hat and cloak and his “appearance was striking, and he knew it.” Milmore’s soul inspiring statues and monuments to the Union dead served as models for a generation of sculptors. The Milmore Monument was originally at the triangular lot bounded by Poplar Avenue, on the left, and Cypruss Avenue, and was beside the Hanley Family Mausoleum. The monument was moved in 1943 at the request of the Milmore family to its present site, near the Gateway on Forest Hills Avenue, and the lot landscaped by Arthur Ashael Shurcliff and Sidney Nichols Shurcliff.
Posted by Anthony M. Sammarco at 1:41 PM