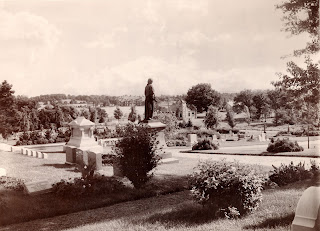 This early twentieth century vista, looking south from Elm Avenue, shows the stone Canterbury Street Lodge (sometimes referred to as the Beech Avenue Chapel) in the center distance at the Canterbury Street gate. The open lands on the left were later to become St. Michael’s Cemetery, primarily an Italian Roman Catholic cemetery; to the left of the statue in the center can be seen the Edmund March Wheelwright (1854-1912) designed buildings of Austin Farm, the former property of Arthur Austin who is called the "Father of West Roxbury," and who successfully persuaded his neighbors to become an independent town known as West Roxbury in 1851. The property was later used as the Mattapan State Hospital and more recently as the Boston Nature Center of the Massachusetts Audubon Society. In the center is the statue monument on that grave of George B. Smith (1868-1949) and on the left, that of Nathan Sawyer (1819-1889.)
Posted by Anthony M. Sammarco at 10:05 AM