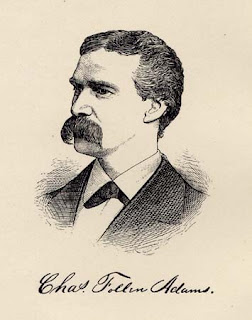 Charles Follen Adams (1842-1918,) the son of Ira and Mary Elizabeth Senter Adams, was born in Dorchester and received a common school education, leaving the grammar school at fifteen years of age. He went as a boy into the well-known house of N.D. Whitney & Co., Boston, to learn the business. He was afterwards salesman in the same house, then went into business for himself with John D. Clapp, under the firm name of J.D. Clapp & Co. In 1872 he became a partner in the firm of Nicholson & Adams, hair goods for ladies’ wear, and later on made a change in business to that of furnishing supplies for the five, ten and twenty-five cent counters that have had such a phenomenal run—the firm name being Newell, Adams & Co. He sold out his interest January 1, 1885, and is now doing a manufacturing and commission, in addition to his journalistic work. At the age of twenty, August, 1862, he enlisted in the 13th regiment Massachusetts volunteers, and was in the battles of Second Bull Run, Fredericksburg, Chancellorsville and Gettysburg—wounded in the latter and held prisoner for three days, when he was re-captured and taken to the hospitals in New York and Rhode Island. After his recovery he was detailed as wardmaster in the convalescent hospital at Washington, where he remained until his term of service expired, in August, 1864. He returned home and established the business that has since demanded his attention. The literary portion of his life is only his diversion, never interfering with his methodical business habits. Charles Follen Adams, however is best known from his humorous and dialectic poems, he having sprung into recognition at once upon the production of his well known and immensely popular “Leedle Yawcob Strauss.” His first effort at rhyme was written in 1870, and his first dialectic verse, “The Puzzled Dutchman,” appeared in 1872. From that time he was an occasional contributor to numerous Boston papers, “Oliver Optic’s Magazine,” “Scribner’s Monthly,” and others until 1876 when “Leedle Yawcob Strauss” appeared in the “Detroit Free Press,” since which time his poems have appeared in that paper, “Harper’s Magazine,” and other publications. The house of Lee & Shepard, published Mr. Adams’s first volume of poems, entitled “Leedle Yawcob Strauss, and Other Poems.” His second volume, entitled “Dialect Ballads,” was published by Harper & Brothers, New York (1887), being a companion to the former volume. Mr. Adams was married in 1870 to Hattie Louise Mills, and they were the parents of Charles Mills Adams and Ella Paige Adams Sawyer. The Adams Lot is on White Oak Avenue, a large granite block monument with a curious log-frame motif.
Posted by Anthony M. Sammarco at 4:22 PM