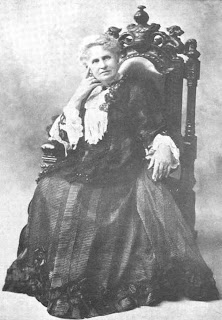 Mary L. Hunt (1830-1906) was a leader of the campaign for temperance education in the schools, Mary Hunt came to Dorchester later in life having lived previously in Hyde Park. Temperance was a family tradition. Mrs. Hunt's father had been an officer in the county temperance society, and while helping her son study college chemistry, she herself became seriously interested in the physiological effects of alcohol. She quickly took the lead in the agitation for education. In 1878 with Julia Colman, she marched upon the board of the Hyde Park School Committee and won over its members. In 1879 she presented to the national convention of the Woman's Christian Temperance Union a plan calling for thorough textbook study of scientific temperance in the public schools. In 1886, largely owing to her effective campaigning, the federal government passed a law requiring temperance instruction in schools under federal control. By 1901 every state had passed legislation of this sort. Legislation alone proved inadequate, and Mrs. Hunt began a campaign to improve the textbooks, supervising the writing of several texts. In 1903 the Committee of Fifty, an alcohol study group composed of eminent scientists, economists, clergymen and educators, issued Physiological Aspects of the Liquor Problem which marshaled impressive testimony challenging statements in W.C.T.U.-approved books, questioning the wisdom of giving young children detailed information about alcoholism, and pointing out the dangers of allowing those committed to a doctrinaire position to control the teaching of a controversial subject. Mrs. Hunt published a Reply to the Physiological Sub-Committee of the Committee of Fifty, and through the efforts of a sympathetic Senator, this work was published as a government document with the circulation of 100,000 copies to members of the W.C.T.U. After her death in 1906, the W.C.T.U. gave up efforts to intervene in textbook writing. Some have suggested that a generation of students brought up on the textbooks approved by Mary Hunt resulted in the enactment of the Eighteenth Amendment. Yet the repeal of prohibition and the statistics on alcohol consumption after the years of her influence suggest that her campaign had only limited long-range effect.
Posted by Anthony M. Sammarco at 4:50 PM