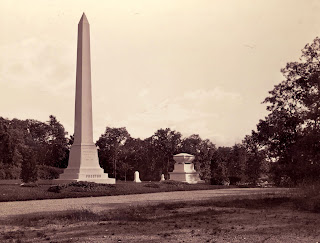 By the late nineteenth century the once open dells and valleys at Forest Hills Cemetery were being developed for both family lots as well as individual graves. With the purchase of "Milton Hill" from William F. Milton, the area was to be connected to Consecration Hill by an impressive stone bridge, designed by William Gibbons Preston, which arched over Greenwood Avenue. The area of Milton Hill was to be developed with large family lots in the first three decades of the twentieth century, and has a rich overlay of funereal monument styles, from Classical to Grecian, Egyptian and Romantic influenced designs which embraced the wide spectrum of available choices.

The early curvilinear avenues at Forest Hills Cemetery were to be augmented by new ones laid out connecting parts of the original cemetery to areas by Walk Hill and Canterbury Streets and west of the Field of Manoah. These new areas had a rich panoply of funereal stones, from colonial revival slate headstones to large limestone, marble and granite monuments often with angels, allegorical figures and classical urns, vases and other embellishments. The twentieth century also saw some spectacular mausoleums that were built throughout the cemetery, such as the Lufkin, Wilbur, Thym, Martyn, Hanley and Haste mausoleums.

Where there is sorrow there is Holy ground.
Oscar Wilde
Posted by Anthony M. Sammarco at 11:21 AM