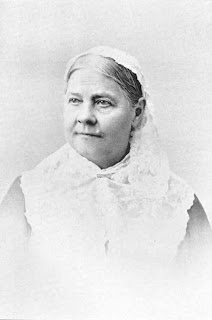 Lucy Stone (1818-1893) was born in West Brookfield, Massachusetts and was descended from an old New England family. Her father, Francis Stone, was a well-to-do farmer and tanner who believed that men were divinely ordained to rule over women. Her mother, Hannah Stone, accepted this view, but even as a young child Lucy became resentful. Though her brothers were sent to Harvard College, her father was shocked when she asked to go to college, and he gave her no financial support. She determined to educate herself, and at age sixteen, she began to teach district school at a dollar per week. During this time her hostility toward the existing status of women increased, especially when she learned that women had no vote in the affairs of the Congregational Church in West Brookfield of which she was a member. Finally in 1843 she had earned the money to enter Oberlin College. At college she was looked upon as a dangerous radical, for she was an ardent abolitionist, was uncompromising on the question of women's rights and became Unitarian in religion. In 1847 she graduated from Oberlin, the first Massachusetts woman to earn a college degree. She refused an invitation to write a commencement address because she would not have been permitted to read it herself, owing to the prevailing belief that it was improper for women to participate in public exercises with men. The injustice was corrected thirty-six years later when Lucy Stone was an honored speaker at Oberlin's semicentennial jubilee. In 1850 she led in calling the first national woman's rights convention at Worcester, Massachusertts. Lucy Stone, who was only barely recovered from typhoid fever, made a speech that converted Susan B. Anthony to the cause. She married Henry Browne Blackwell, a Cincinnati hardware merchant and abolitionist in 1855 but kept her own name, calling herself Mrs. Stone and this radical action added the phrase "Lucy Stoner" to the language to denote a married woman retaining her maiden name. The birth of Alice Stone Blackwell in 1857 led Lucy Stone to give up some of her traveling and lecturing, but she continued to organize many campaigns for woman's suffrage. Perhaps Lucy Stone's greatest contribution was in founding and largely financing the weekly newspaper of the American Woman Suffrage Association, the Woman's Journal. During a run of forty-seven years, under the editorship of Lucy Stone, her husband Henry Blackwell and later Alice Stone Blackwell, the Woman's Journal more than any other journal was the voice of the woman's movement. After 1887 Lucy's voice failed, and she spoke only to small gatherings. Her last lectures were delivered at the World's Columbian Exposition in Chicago in 1893. She died at her large mansion on Boutwell Street on Pope's Hill In Dorchester and her funeral was held at the Church of the Disciples in Boston's South End; she was cremated at the crematorium of the Massachusetts Cremation Society on Walk Hill Street, adjacent to Forest Hills Cemetery. Luncy Stone was the first person to be cremated in New England.
Posted by Anthony M. Sammarco at 3:18 PM