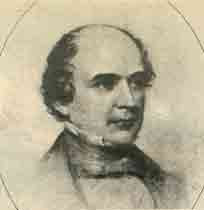 Saint Paul’s Roman Catholic Church on Hartford Street in Dorchester, Massachusetts is a fine example of the architectural work of the prominent architectural firm of Maginnis & Walsh. It was built on the former estate of Robert Chamblett Hooper (1805-1869), a wealthy Boston merchant. Hooper was born in Marblehead, the grandson of “King Hooper," a well-known and respected merchant. Robert Hooper attended Phillips Academy and was graduated from Harvard College in 1822. After he completed his education, he went to sea on one of his father’s fleet of ships, visiting Gibraltar, Marseilles, Nice and other ports known to most Bostonians as names only. His interest in the sea deepened, and he decided to follow his interest and made numerous voyages in his father’s ships. Sailing the Seas, his travels took him to the West Indies, Europe, India, and south America, and gave him a firm footing for a life at sea. Well-educated, his sea voyages made him well-equipped to assist his father, as the Hoopers were a wealthy seafaring family in Marblehead. Hooper’s first ship was the brig “Walga,” on which he sailed as captain and supercargo, a term for the officer in charge of the cargo. This voyage took him to Matansas and to Russia at the age of 21. Successful, he was entrusted with his father’s ship “Arbella.”

Continuing with his life at sea, he later married his cousin Anna Maria Hooper, who died in childbirth. His second wife was Adeline Denny Ripley, with whom he had children. Having made a fortune from his life at sea, he retired from it and established himself as a merchant in Boston. As a merchant, Hooper bought and sold ships. He also imported sugar and other foreign commodities to Boston and traded on Central Wharf, of which he owned a share. He later built Constitution Wharf, and moved his storehouses and office to the new location. It was in 1845, equipped with a large personal fortune, that he purchased an extensive tract of land in Dorchester. The land in Dorchester was composed of slight hills and valleys, with a superb view of Boston from the summit. It was chosen, according to Gertrude Hooper, his granddaughter, “so the sun would not blind him on the drive home from his Boston office.” He built a large and architecturally significant villa he named “Oakland,” and he entertained lavishly. He was probably among the most wealth residents of ninteenth-century Dorchester. In 1869, the last year the town published a Taxable Valuation, his house alone was appraised at the vast sum of $40,000. The twenty acre estate was bounded by Dudley Street and Hartford Street. The Hooper Family retained ownership of Oakland after his death in the same year, but subdivided the estate over the next four decades. Lingard Street was first known as Hooper Street in honor of the family. Robin Hood Street, Chamblett Street and Half Moon Street were laid out through the Hooper Estate, and substantial houses were built by well-to-do families. The aspects that had attracted Hooper to build in Dorchester were the same as those that attracted others in the early “Street Car Suburb” period: gentle slopes, outcroppings of puddingstone, superb views of Boston to the north and the Blue Hills to the south, and beautiful old oak trees. The Hooper family had built and moved to a townhouse on Beacon Street in the Back Bay, but they held ownership of Oakland until 1911, afterwhich the house and the immediate land surrounding it was sold to the Catholic Archdiocese of Boston. The house was adapted for use as the rectory of Saint Paul’s priests. In the 1930s, the stone church of Saint Paul’s was designed and built by Maginnis & Walsh, the architects of the archdiocese. The rectory was used until the late 1970s, when it was demolished and a smaller building was erected on the same site chosen by Hooper over a century before. The gentle slopes, the panoramic views, and the picturesque aspect of the area remain to this day, but the former estate of Robert Chamblett Hooper is no more. The Hoopers are buried at Forest Hills Cemetery, on a terrace overlooking Lake Hibiscus.
Posted by Anthony M. Sammarco at 12:03 PM