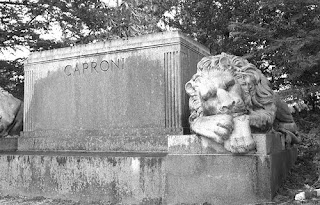 Pietro Paulo Caproni (1862-1928) was born in Barga, Italy and left for Boston in the late 1870s. He was founder and co-owner with his brother Emilio Caproni of PP Caproni & Brother, manufacturers of plaster reproductions of classical and contemporary statues. These cast reproductions were, in an era before commercial photography, an integral educational tool in teaching people the history of art and antiquities. Caproni casts can be identified by a metal hallmark imbedded into the base of the cast. Early casts have brass hallmarks bearing "PP CAPRONI & BROTHER PLASTIC ARTS, BOSTON, MA." In later years the medium changed to aluminum. In 1932 the company changed names to 'Caproni Galleries, Inc' and was a supplier to Disney for the plaster figurines of all the Disney characters. Amadeo Nardini, owner of a casting company which specialized in ecclesiastical subjects, bought the company around 1940 and ran it as "Caproni Galleries of Amadeo."
Symphony Hall in Boston has sixteen life sized mythical and real life statues in niches by Caproni. The memorial to Pietro Caproni, and his second wife Gertrude Brinkhaus, is on Summit Avenue on Milton Hill and was designed by Ralph Adams Cram (1863-1942.) The monument is flanked by statues of the Sleeping and Awakening Lions, which are based on Antonio Canova's design for the Tomb of Pope Clement XIII in Rome.
"The quality of a reproduction is of the greatest importance. In an original work of merit there is a subtleness of treatment- a certain feeling which, if captured in reproduction, places the finished piece within the realm of art itself."
Pietro Caproni, 1911
Posted by Anthony M. Sammarco at 2:05 PM