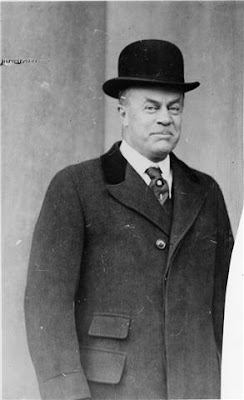 Andrew James Peters (1872-1938) was born in Jamaica Plain, Massachusetts, the son of Andrew James Peters and Mary Richards Whitney Peters. He was married in 1910 to Martha R. Phillips, a descendant of Boston's First mayor John Phillips. The Peters lived on the family estate on Asticou Street, near Forest Hills, a farm in Dover, Massachusetts and on North Haven Island, Maine.
Peters attended Hopkinson’s School in Boston and St. Paul’s School. He was a graduate of Harvard and Harvard Law School and was admitted to the Massachusetts Bar in 1897. He was elected to Congress where he would serve from 1907 to 1914. He served as Assistant Secretary of the Treasury before he was elected mayor of Boston, serving from 1918 to 1922. During his term as mayor, the Boston Police Strike of 1919 occurred, and failing to call out the state militia it was left to Governor Calvin Coolidge to act, which made him a national figure and catapulted him to national office. After serving as mayor, he resumed his law practice and served as president of the Boston Chamber of Commerce from 1926 to 1928.
Peters' Hill at the Arnold Arboretum was named for him, and he served as a trustee of Forest Hills Cemetery, and is buried in the Peters Lot on Althea Path.
In a ditty he wrote after leaving office, he said:
I've done my job as Mayor,
And they say I've done it well,
So I'll give up public life
And rest and play a spell.
Posted by Anthony M. Sammarco at 1:05 PM