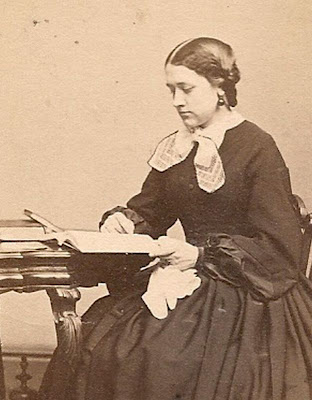 The concept of social reform and responsibility was a great factor in the behavior of many 19th century Dorchesterites, and no person was more aware of this than Miss Cummins. Maria Susanna Cummins (1827-1866) was born in Salem, Massachusetts, the daughter of The Honorable David and Maria Franklin Kittredge Cummins; her father was the judge of Common Pleas of Norfolk County. She was educated at the exclusive Mrs. Sedgwick’s School in Lenox, returning to her father’s home in Dorchester after her “finishing.” The Cumminses were a well-to-do family of education and wealth, who had moved to Dorchester’s Meeting House Hill in the 1840’s. The Cummins Family had purchased the former Turks Head Tavern, on Bowdoin Street, an 18th century tavern that had been built by Reverend John Danforth, minister of the Dorchester Meetinghouse, in 1712. Once the family had settled, they began to attend the First Parish Church on Meeting House Hill and Maria Cummins began to teach Sunday School at the church, where interestingly the first Sunday School class had been formed in 1822, one of the first Unitarian classes in the area. Under the direction of William Taylor Adams (known by his nom de plume Oliver Optic,) Miss Cummins led a defined and religious life, devoting herself to her students. Reverend Theodore Clapp said of her in 1854 that “No lady of my acquaintance is more richly endowed with those mild, social, refined and gentle qualities which, in view of our sex, generally, constitute the principal beauty of the female character…. [and that] simplicity is the crowning ornament to her manners, as well as he writings” It was in 1850 that she undertook the writing of a novel to please her nieces, the daughters of her sister Helen and Edmund Pitt Tileston. Helen Cummins had married Edmund Pitt Tileston, co-owner of the Tileston & Hollingsworth Paper Mill on the Neponset River. He was a founder in 1843, the year of his marriage, of the Dorchester Historical & Antiquarian Society, and active in numerous charities. Their daughters, Florence, Grace and Katherine Tileston, were doted upon by their aunt, and with the publication in 1853 of her book The Lamplighter, were flattered by the attention. The book, a tribute and gift from their aunt, was to bring Maria Cummins a great deal of attention. Published anonymously, it was to sell over 65,000 copies within five months. The novel went through numerous editions, and was placed in many Unitarian Sunday School classes throughout New England. In the period between 1850 and her death in 1866, Miss Cummins wrote Mabel Vaughan, El Fureidis, Little Gerty and Haunted Hearts. She also contributed numerous articles for the prestigious Atlantic Monthly. The books were all of a semi-religious type, and well received by her readers. Of a deeply religious nature herself, Maria Cummins joined the First Parish Church in 1864, and died after a lengthy illness. She was to be buried from the church on Meeting House Hill on October 1, 1866, and interred in her family lot at Forest Hills Cemetery.
Posted by Anthony M. Sammarco at 8:01 PM