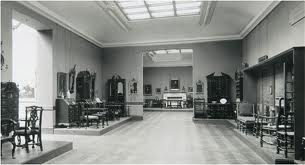 No trip to New York City is complete for me without a trip to visit the Metropolitan Museum of Art on the Upper East Side. Its collection of paintings, sculpture and decorative arts are superb, and its gift shop a boon to my lack of time for shopping, but what interests me most is the collection of American Decorative Arts, which have a strong connection to Dorchester. In 1909 the MET hosted an exhibit of American Decorative Arts in recognition of the 300th anniversary of the founding of New York, and it was known as the Hudson-Fulton Exhibit. The exhibit included furniture, paintings, pottery, glass and textiles in one of the most important retrospective exhibits ever held in the United States up to that time. Among the numerous lenders to the exhibit, which attracted a record 300,000 people, was H. Eugene Bolles, a resident of Dorchester. Hezekiah Eugene Bolles (1853-1910,) a graduate of Boston University Law School and a noted attorney in Boston, lived in a grand house at 401 Quincy Street in Dorchester. The son of William and Cornelia Congdon Palmer Bolles, he was born on Bolles Hill in New London, Connecticut, and moved to Dorchester in 1882 when he married Elizabeth Clapp Howe (1853-1920,) a daughter of James and Martha Neal Jenkins Howe of Dorchester. After their marriage, Elizabeth and H. Eugene Bolles commissioned local architect John A. Fox (1835-1920) to design a large house in 1885 at the crest of Quincy and Bellevue Streets, just up the hill from Columbia Street (now Columbia Road.) They lived like other affluent Dorchester families in the post annexation years, except that they added to their family heirlooms inherited by Mrs. Bolles from her Dorchester ancestors with fine examples of furniture, glass, china and textiles from the early 17th century to the Federal period. Bolles, who had begun collecting fine antiques in the early 1880’s, was so serious a collector that he was a founder of The Walpole Society, along with Henry Knight and Luke Vincent Lockwood, a scholarly group of museum curators, professionals and above average collectors who met at fellow members’ homes, museums and historic houses for private and in-depth tours and lectures. The Bolles House was literally crammed with furniture ranging in style from Pilgrim chests and chairs, Court cupboards to Chippendale highboys, lowboys and chairs to high style Federal card tables, chairs and sofas; not just was the house furnished with museum quality antiques, but they were stored in the attic and in an off site storeroom. Interestingly, the Bolleses not only had a deep appreciation and increasing awareness of their collection, they actually used it on a daily basis, which is a remarkably healthy attitude for someone who collects antiques. During the year leading up to the New York exhibit, the Bolleses were often visited by Henry W. Kent, a friend who was also an assistant to Robert de Forest, secretary to the museum and chairman of the celebration committee on art exhibits. Kent was on friendly terms with many early art and antique collectors who had amassed important collections, such as George S. Palmer, R.T.H. Halsey, Alphonse Clearwater and H. Eugene Bolles, who was induced buy his friend to loan forty one objects to the exhibit. H. Eugene Bolles and his wife came to the realization that their collection of American Decorative Arts, which spanned the period from 1630 to 1815, was not only an important collection with a wide spectrum of styles and objects, but that it should be preserved intact. Following the exhibit, he was induced by Henry Kent to sell the collection, which encompassed four hundred and thirty four pieces of furniture and included “miscellaneous objects ranging from cooking utensils to fire buckets and helmets,” to the MET, where it was displayed in period room settings and like-object exhibitions. Unfortunately, even though the Bolles’ collection was preserved intact, he sold it to the museum rather than donating it and the collection was actually purchased by the museum with funds donated by Mrs. Russell Sage (1828-1918,) a wealthy benefactor of the museum and is known today as the Sage Collection, rather than the Bolles Collection. To Kent, who must have been ecstatic in having secured the Bolles Collection for the museum, H. Eugene Bolles wrote in a letter “We hope… that before long we shall have the pleasure of another visit from you. If we have no chairs for you to sit in, you will understand the reason why, and I am sure under the circumstances will not object to sitting on the front stairs.” Well, with such a vast amount of antique furniture shipped from Dorchester to New York, one can imagine how empty the house on Quincy Street actually was. So, the next time you are in New York, plan to stop by the MET and visit their impressive decorative arts collection. While admiring these premier pieces of American craftsmanship, remember that it was through the discerning eye, diligent collecting skills and tenacity of a fellow Dorchesterite that ensured that they were enjoyed by the public after his death.

The Bolleses are buried on Daffodil Path at Forest Hills Cemetery.
Posted by Anthony M. Sammarco at 8:03 PM