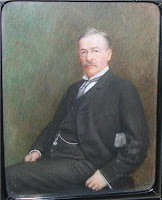 The walking tour last evening at Forest Hills Cemetery was wonderful, with a very large attendance, many of whom had never been to the cemetery before. In fact, there were seven dogs that also attended, and all agreed that it was a resounding success and enjoyed by all.
This walking tour was on Milton Hill and among the "permanent residents" that were included were William Milton, whose farm in Jamaica Plain was incorporated into the cemetery and laid out as "Milton Hill," which attracted families that purchased large lots. Among those included were William Alfred Paine (1855-1929) (seen on the left,) co founder with Wallace Webber of Paine Webber and whose exedra monument was designed by Tiffany Studios. The tour also included Eben Dyer Jordan (1822-1895) of Jordan Marsh & Company fame, whose monument is a large cenotaph; Pietro Paulo Caproni (1862-1928) who was owner of Caproni & Brother, which brought plaster casts to an art form; George Robert White (1847-1922) whose Cuticura soap sales provided the financing for the George Robert White Fund. These are only a few of the people discussed on this tour, but it was a lovely balmy evening enjoyed by all. Plan on joining us on an upcoming tour!
Posted by Anthony M. Sammarco at 10:49 AM