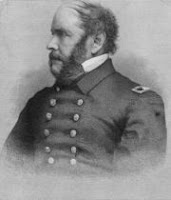 Rear Admiral John Ancrum Winslow (1811-1873) is buried in a large lot at Forest Hills Cemetery with a huge boulder in the center of the lot, which was donated by the citizens of Warner, New Hampsire in memory of their hero.
Winslow had entered the United States Navy as a midshipman in 1827 and progressively was promoted to the rank of lieutenant in 1839 and commander in 1855. During the Mexican War, he was commended for gallantry for his activities at Tobasco. In 1864, he led troops to victory in one of the Civil War's most notable naval actions, the battle between the USS Kearsarge and the CSS Alabama. The Alabama was sunk in the 1864 Civil War sea battle, and Rear Admiral Winslow was to be decorated by President Abraham Lincoln.
In retirement the Winslow Family lived on Kearsarge Avenue in Roxbury, just off Warren Street and opposite the Roxbury Latin School that had been there until its move to West Roxbury in the 1920s. This decorated Civil War hero is one of many soldiers and sailors buried at Forest Hills Cemetery who valiantly and courageously faught to preserve the Union of the United States.
Posted by Anthony M. Sammarco at 11:10 AM