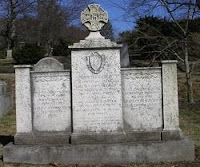 Governor Curtis Guild, Jr. (1860-1915) was the son of Curtis and Sarah Courtnay Guild; in 1892 he was married to Charlotte H. Johnson.
He was the editor and publisher of the Commercial Bulletin, a newspaper founded by his father, Curtis Guild. In 1891, Guild joined the Massachusetts Volunteer Militia earning the rank of Brigadier General. During the Spanish American War, he served as Inspector General of Havana. He was Lieutenant Governor of Massachusetts from 1903-06, and was then elected as governor of Massachusetts, serving from 1906 to 1909. He later served as special Ambassador to Mexico, and later as Ambassador to Russia just prior to the Russian Revolution. He was a member of the Freemasons, the Society of Colonial Wars, the Sons of the American Revolution, and the American Forestry Association.
The Guild Family Lot on Rock Maple Avenue has a profusion of white marble monuments, including two angels, one seeming to reach toward Heaven and the other holding an oval plaque marking the graves of this prominent family. The base of one angel is engraved “The spirit shall return unto God who gave it.” Curtis Guild (1800-1849), the family progenitor, was a merchant in the East India trade and his son and grandson continued the family’s commitment to public service.
Posted by Anthony M. Sammarco at 6:17 PM