Ten Times Ten Is One 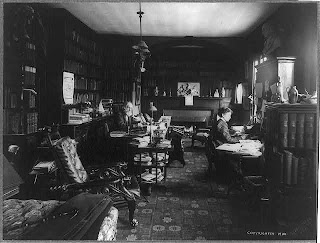 Edward Everett Hale (1822-1909) was pastor of the South Congregational Church in Boston’s South End from 1856 to 1899. A graduate of Harvard College, class of 1839, Hale was the son of Nathan Hale, proprietor and editor of the Boston Daily Advertiser and the nephew of the great nineteenth century orator Edward Everett. Hale married Emily Baldwin Perkins in 1852.
Hale is probably best known as the author of A Man Without a Country which was published in 1863, and did much to strengthen the Union cause during the Civil War; in this book, as in some of his other non-romantic tales, he employed a minute realism which led his readers to suppose the narrative a record of fact rather than of historical fiction. His portrait was painted by his son Philip Leslie Hale (1865-1931) who is also buried in the family lot at Forest Hills Cemetery, along with his artist wife Lillian Clark Westcott Hale and their prolific authoress daughter Anna Westcott ("Nancy") Hale Hardin Wertenbaker Bowers. Combining a forceful personality, organizing genius, and liberal practical theology, Hale was active in raising the tone of American life for half a century. He had a deep and avbiding interest in the anti-slavery movement, as well as popular education, and the working-man's home. In addition to his long service as a minister, Hale was also an assistant editor of the Boston Daily Advertiser and edited the Christian Examiner, Old and New (which he assisted in founding in 1869 and which merged with Scribner's in 1875), Lend a Hand (which he founded in 1886 and which merged with the Charities Review in 1897), and the Lend a Hand Record. One of his charming two volume history of Boston and its personmages was Memories of a Hundred Years (1902.) He was also the prolific author or editor of more than sixty books, among them fiction, travel, sermons, biography and history.
In regards to his longstanding motto "Ten Times Ten Is One," Reverend Hale once said, "I am only one, but I am one. I cannot do everything, but I can do something. What I can do, I should do and, with the help of God, I will do." This motto was first enunciated in 1869 in his Lowell Institure lectures which extolled "Look up and not down, look forward and not back, look out and not in, and lend a hand." This challenging motto was the basis for the formation of Lend-a-Hand Clubs, Look-up Legions and Harry Wadsworth Clubs for young people.
In 1903 he became Chaplain of the United States Senate, and lived in Washington, D.C.
The Hale Family monument is on Ageratum Path.
Posted by Anthony M. Sammarco at 3:08 PM