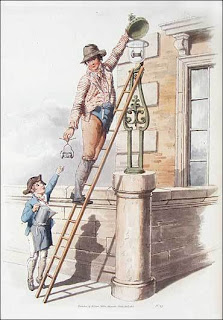 The concept of social reform and personal responsibility for the benefit of the less fortunate was a great factor in the behavior of many ninteenth century Bostonians, and no person was more aware of this than Miss Maria Susanna Cummins (1827-1866.)
Born in Salem, Massachusetts, she was a daughter of Maria Kittredge Cummins and the Honorable David Cummins, a well respected judge of the court of common pleas of Norfolk County. Educated at the exclusive Mrs. Charles Sedgwick's Young Ladies School in Lenox, she returned to her family home in Dorchester after her "finishing." The Cumminses were a well to do family of social standing, education and wealth, and they had moved to Dorchester's Meeting House Hill in the 1840s. They had purchased the former "Turk's Head Tavern" (later the site of St. Peter's School) on Bowdoin Street, an eighteenth century tavern that had been converted to a dwelling of large proportions which was needed as Judge Cummins had eight children. Once the Cumminses had settled, they began to attend the First Parish Church on Meeting House Hill, and Maria Cummins began to teach Sunday School at the church, where the first Sunday School class had been formed in 1822, and which was one of the first Unitarian classes in the Boston area. Under the direction of William Taylor Adams (whose nom de plum was "Oliver Optic,") Miss Cummins led a defined and religious life, devoting herself to her students. It was in 1850 that she undertook a novel to please her neices, the daughters of Edmund Pitt and Helen Cummins Tileston. Tileston was a cofounder with Mark Hollingsworth of the Tileston & Hollingsworth Paper Mill on the Neponset River. He was also a founder in 1843, the year of his marriage, of the Dorchester Historical & Antiquarian Society that survived until 1907 when it merged with the New England Historic and Genealogical Society. Florence, Grace and Katherine Tileston were doted upon by their aunt, and with the publication in 1854 of her book The Lamplighter, were obviously flattered by her attentions. Published anonymously, one reviewer called it "one of the most original and natural narratives," and the premise of the book was of a child lost in infancy, rescued from a cruel woman by an old lamplighter, adopted by a blind woman, and later discovered by her well-to-do father. The book was an immediate best-seller and a cultural phenomenon. Said to be second in sales only to Harriet Beecher Stowe's "Uncle Tom's Cabin," published two years earlier, it reportedly sold 20,000 copies in twenty days and 65,000 copies in five months. The success of "The Lamplighter" was not limited to America, for it sold over 100,000 copies in Britain alone. At least thirteen British firms published the novel, often in multiple editions. It was to be translated into several different languages, including French, German, and Dutch, and it continued to sell well into the twentieth century.
In the period between 1857 and her death in 1866, Maria Cummins was also the author of "Mabel Vaughan" in 1857, "El Fureidis" in 1860, "Haunted Hearts" in 1864 and "Little Gerty" in 1869. She also contributed numerous articles to the "Atlantic Monthly." All of her books were of a semi-religious and benevolent aspect, and were well received by her avid readers. Of a deeply religious nature herself, Maria Cummins had joined the First Parish Church in 1864, over twenty years after she began attending divine services. She was buried from the church in 1866, and was interred in the family lot at Forest Hills Cemetery.
Posted by Anthony M. Sammarco at 2:13 PM