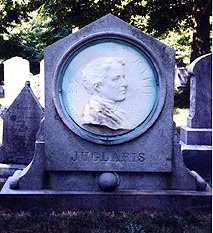 I've been taking a closer look at the Field of Manoah to get ready for an upcoming tour and found some interesting new people buried at Forest Hills. One such discovery is Katie Juglaris, who is memorialized with a beautiful marble medallion with a portrait created by her husband, the artist Tommaso Juglaris. I had never heard of either of them, but was intrigued by the skill and charm of the portrait. I did some research to find out more about him and found that he was quite well-known in the Boston area in the late 1890s, but later fell into obscurity.
An Italian immigrant, Juglaris created frescos for many interiors, including a series portraying the Greek muses for the Michigan State Capitol; these were painted on canvas here in Boston and shipped to Michigan for installation in the building's ornate dome. He taught at Rhode Island School of Design and worked for master lithographer Louis Prang (who is memorialized at Forest Hills with a cenotaph). Interestingly, Juglaris was one of the mentors of the much better known Childe Hassam. Juglaris is not buried at Forest Hills because he returned to his native Italy, where he died in 1925. However, his sensitive portrait of Katie, complete with an elegant pearl earring, remains permanent testimony to their love.
Posted by Dee at 11:52 AM