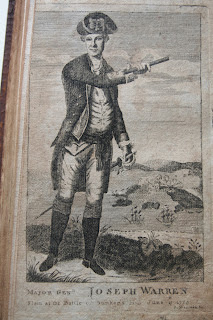 Copperplate engraving of Joseph Warren at Bunker's Hill is from 'An Impartial History of the War in America,1781' in the collection of this author.
Posted by Al Maze at 2:32 PM

Email ThisBlogThis!Share to TwitterShare to FacebookShare to Pinterest
Labels: history