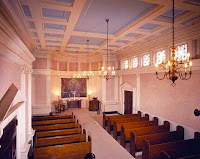 The Massachusetts Cremation Society opened a crematorium on Walk Hill Street in 1893, and was financed by local cremation societies. The building was designed by local architect Ludvig Sandoe Ipsen (1840-1920) and built of Roxbury felsite in the classical style; an addition, designed by Thomas Fox and Edward Gale, was built in 1905 with a basement columbaria. The first cremation in New England took place here in 1893, and was that of Dorchester resident and women's rights advocate Lucy Stone.
In 1925, Forest Hills Cemetery acquired the crematory, and since that time has almost tripled its size.
The Lucy Stone Chapel, seen here, is the largest of the two chapels at the Forest Hills Cemetery Crematorium and was named in memory of Lucy Sone, wife of Henry Browne Blackell. Lucy Stone (1818-1893) was a leader of the national women's rights movement and referred to as "the morning star of the woman's rights movement." She was an organizer of the Massachusetts Anti-Slavery Society, the first Massachusetts woman to receive a college degree (Oberlin College in 1838,) the first married woman to keep her own name, and the founder and editor of the Women's Journal. However, she was the first person to be cremated in New England, which was at the Massachusetts Cremation Society, now the Forest Hills Crematorium, where her ashes are deposited in a large urn later co-mingled with those of her husband and daughter.
Posted by Anthony M. Sammarco at 6:46 AM